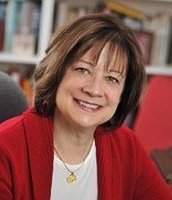 The author of four picture books, including Passing The Music, a story inspired by the real-life story of two old-time fiddle players, that was nominated for a West Virginia Children's Choice Award as well as the Cybils award.

Sarah's third book, Once Upon a Baby Brother, was included on the Bank Street College Best Children's Books of 2011 list.

She holds an MFA in Writing for Children from Vermont College where she won the Harcourt Post-Graduate Scholarship. Her poetry has been published in Cricket magazine and her first novel for middle grade readers is forthcoming from Candlewick.

Sarah has taught in writing workshops at The Writer's Center in Bethesda, MD and in the Highlights Founders Workshops, as well as in libraries and schools throughout the country. Sarah was born in Fairmont, attended first and second grades in Huntington.