Cynthia Rylant was born in Hopewell, Va., in June 1954. Her parents' unhappy marriage ended when she was four, and Rylant went to live with her grandparents in Cool Ridge, WV, while her mother attended nursing school. The young Rylant lived with her gr 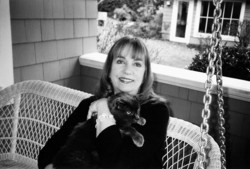 andparents for the next four years; it is this time and place that she remembers in her first book When I Was Young In the Mountains, a picture book describing the joys of her Appalachian childhood, which earned Rylant the American Book Award in 1982, and illustrator Diane Goode a Caldecott Honor Award. Later she and her mother moved to Beaver, a small town in southern West Virginia. Young Cynthia had little contact with her father after her parents' divorce, though he wrote occasionally for a while after they moved to West Virginia. When he contacted her after years of silence, Rylant hoped for a reunion, but her father succumbed to the combined effects of alcoholism and hepatitis before such a reunion could occur. She was only thirteen when he died. It is this loss that she describes in But I'll Be Back Again as propelling her to a writing career.

After high school and with no real career plans, Rylant attended Morris Harvey College (now the University of Charleston), graduating in 1975. She followed that degree with a Master of Arts in English from Marshall University and a Master of Library Science from Kent State. It was while working in the children's section of the Akron (OH) Public Library that Rylant was first truly exposed to children's literature; there had been no libraries or bookstores in the mostly poor, rural areas of her childhood.

When I Was Young In the Mountains, her first book, was published in 1982. The autobiographical tale caught the attention of critics and parents, becoming an ALA notable book and a Reading Rainbow selection. She followed with six more picture books before publishing the first volume in her popular Henry and Mudge series, Henry and Mudge: The First Book of Their Adventures, in 1987. She has continued writing prolifically, publishing more picture books, 34 Henry and Mudge volumes, as well as books for older readers including young adult novels and story collections, and collections of poetry.

In 1993, Cynthia Rylant donated her manuscripts to the Kent State University library.

When I Was Young in the Mountains

Night in the Country

An Angel for Solomon Singer

Other books and poetry

Children of Christmas: Stories for the Season

A Couple of Kooks and Other Stories about Love

Appalachia: The Voices of Sleeping Birds

I Had Seen Castles

The Blue Hill Meadows and the Much-Loved Dog

The Old Woman Who Named Things

Bless Us All: A Child's Yearbook of Blessings

The Islander: A Novel

Give Me Grace: A Child's Daybook of Prayers

The High Rise Private Eyes: The Case of the Climbing Cat

Let's Go Home: The Wonderful Things About a House

Old Town in the Green Groves

Good Morning Sweetie and Other Poems for Little Children