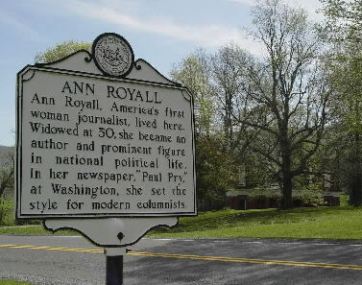 Journalist Anne Newport (June 11, 1769-October 1, 1854) was born and raised on the Pennsylvania and Virginia frontiers.  At 17, she moved to Sweet Springs, Monroe County, with her widowed mother, who became Maj. William Royall’s housekeeper. Royall encouraged Anne’s use of his large library and tutored her in the history and politics of the Revolution and early Republic. She married Royall in 1797 and moved to Charleston after his death in 1812, then traveled throughout the South.

In 1824, and in need of an income, she wrote, published, and marketed 11 volumes picturesquely describing people and places from New England to Western Virginia to the deep South. In 1831, she settled in Washington, where she began a weekly newspaper, Paul Pry, to ‘‘expose all and every species of political evil and religious fraud’’ and to ‘‘advocate the liberty of the press, the liberty of speech, and the liberty of conscience.’’ When the growing unpopularity of her rancorous journalism forced discontinuation of Paul Pry, Royall quickly established The Huntress, published 1836–1854, which was less vitriolic and more entertaining.

Royall’s writing about politics, religion, and social movements and her characterizations of the personalities and life of the nation’s capital manifested her greatest hope, ‘‘that the union of these States may be eternal.’’